Published in Rock · 19 June 2021
Tags: angellios, 20221, angellios, angellios, news, radio, angellios, billboard, world, music, news, durans, durans, 2021
For the week ending August 20, 1983, Duran Duran's self-titled debut album ascended to its peak position of No. 10 on the Billboard 200 albums chart (then known as the Top LPs & Tape chart). Today, that fact wouldn't be out of the ordinary: The Birmingham, England-formed rock band have had six LPs land in the U.S. top 10, including their last album, 2015's Paper Gods, which also reached No. 10.
However, back in 1983, Duran Duran's success was particularly hard-fought. The full-length had debuted on the chart at No. 179 six months before, in the issue dated February 19 -- nearly two years after the LP's initial release date of June 15, 1981.
The album was an immediate hit in the U.K., debuting at No. 9 and peaking at No. 3, while the LP's iconic first single, "Planet Earth," was a major hit both in England and Australia. It's difficult to imagine now, what with the perma-cool stature of Duran Duran and the enduring resonance of "Planet Earth" and the album's other major hit, "Girls on Film," but American audiences took a while to warm up to the band and LP. In fact, Duran Duran's debut took a very unusual path to commercial success: It became a breakout hit in the U.S. only after the band's second album, 1982's Rio, was already a smash -- and after it was reissued with the addition of a stellar new single, "Is There Something I Should Know?"
Still, in advance of their debut's original U.S. release, Duran Duran started making waves in a place where they felt right at home: the dancefloor. For the week ending April 4, 1981, the import of "Planet Earth" debuted at No. 88 on Billboard's Dance Club Songs chart, then titled the Disco Top 100. By the week of May 23, the song was up to No. 26 -- and a month later, in the issue dated June 20, the song received a positive review in Billboard's Top Single Picks section: "Armed with an irresistible rhythm and a chokehold of a hook, this dance rock song could do well with top 40 and AOR audiences." 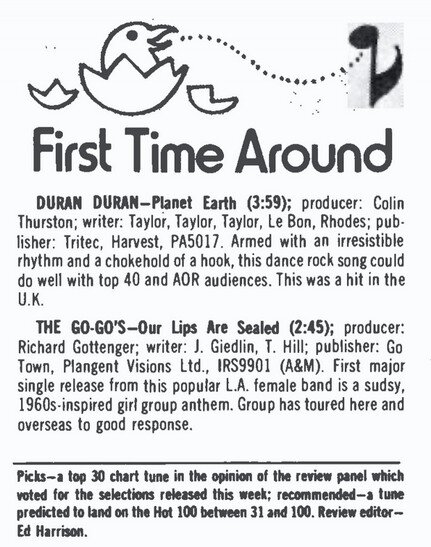